Rail Nation is the ultimate strategy tycoon game and train simulator! Control your own railway empire from the earliest days of the railroads through to the modern day. You get to run trains, drive locomotives, build stations, and choose the routes. Go full steam ahead in this sim! 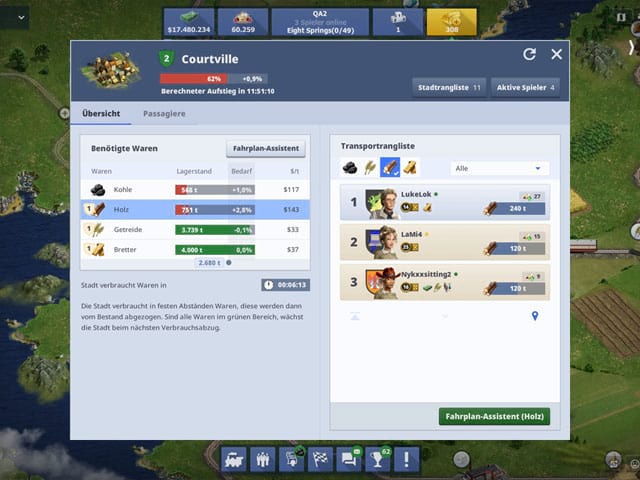 Train to become the richest railway tycoon in Rail Nation USA by mastering the technical and profitable sides of your railway company and competing with fellow players worldwide!

In this transport video game by Travian Games, you begin by building a basic train route through a small hub city. Then you plan their routes, production times, deliver goods like coal, earn money, and build additional lines to connect to more and more American cities from New York to San Diego while growing your train station and railway company.

In the train simulation game, gameplay will progress through six authentic eras as time passes. Each of the 6 eras lasts two weeks and will progress whether or not people are actively playing. Players are divided into groups of cities in the game, and each era offers more locomotives to choose from and more ways to deliver freight for profit!

Build as many railways and infrastructure as you can to collect prestige points. You can do this by upgrading your rail system, purchasing cargo train or passenger train, delivering more goods, investing in industries, or taking part in competitions. Research modern technologies and choose from 150 realistic engines and trains. Feel the power of your team: Get together with other players in a powerful alliance, dominate your game world, and lead your train empire to victory!

As well as making important strategic decisions, players will also need to manage their finances. For example, players will need to ensure that they pay contractors on time and use that money to reinvest in the railway to avoid going into debt. There are a number of different ways in which players can earn money in this game. For example, players can invest in new stations in order to increase the number of goods that are transported along the railway lines. Moreover, players can invest in extra tracks and trains in order to increase the amount of passengers that are transported. Overall, Rail Nation is a fantastic time management game that is well suited for interested strategy gamers!